Although it’s yet to be launched, it has grabbed quite a bit of hype due to the ban on PUBG by the government. What’s more convenient is that it was announced just after PUBG was banned, as if PUBG was banned just to launch this game.

Ncore Games grabbed the opportunity to mint money. NCore games launched the poster just after the ban on PUBG. 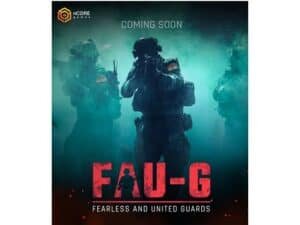 It gained both positive and negative response as the idea of a home brewed Battle Royale game by an Indian company gained quite a positive response; however the launch poster was copied from the poster of a movie, which was not liked by most.

The poster was heavily inspired by a stock image on the internet. In fact it was also seen in the song “Today We Rise”.

FAUG’s Poster was launched on 4th September 2020, soon after its release on twitter, it received heavy backlash as it was copied from stock images.

In no time it became trending on Twitter. As it’s said negative publicity is also publicity and it helped FAUG garner a lot of attention all around India. What was more interesting that it was backed by Akshay Kumar himself.

He also re-tweeted the poster on 4th September 2020 and supported the idea of a Battle Royale which was developed in India by an Indian Developer company called NCore Games. In his tweet he also thanked PM Narendra Modi’s Atmanirbhar Movement.

20% Revenue Of FAUG Game Given To Bharat ke Veer Trust

He also announced that 20% of the revenue gained by the game will be contributed to Bharat ke veer Trust, which is a trust for the family martyrs of the Indian Army.

He also said that the players will also learn about the bravery and sacrifices of the Indian Army and will learn to respect the army better. What’s more interesting is that he himself is a stakeholder in the game.

Recently, the official trailer of the FAUG Game was also launched on Twitter and YouTube on the auspicious occasion of Dusshera. It was launched on twitter on 25th of October. The trailer received a lot of positivity and the graphics seemed quite good.

Today we celebrate the victory of good over evil, and what better day to celebrate our Fearless and United Guards, our FAU-G!
On the auspicious occasion of Dussehra, presenting the #FAUG teaser.@nCore_games @BharatKeVeer @vishalgondal #AtmanirbharBharat #StartupIndia pic.twitter.com/5lvPBa2Uxz

Although we will have to wait for the actual launch of the game in order to check the graphics.

I would like to clear that the contents of FAUG GAME APK Download is pirated and piracy is illegal and we do not promote piracy.

We are not recommending you to download FAUG GAME APK from  any thirt party links.

There were storm of fake trailers of this game on YouTube which were misleading. Just as the fake trailers, you can also find numerous fake FAUG games on Play Store and fake APK of the same.

These fake APK’s may contain harmful viruses which can have the risk of data loss and other privacy issue.

If you search for FAUG on internet, you will find numerous fake APK’s which have no relationship with NCore Games.

If you try to install them, your phone will be prone to harmful viruses and it could even get hacked. We would not recommend you to download any fake APK’s and will suggest you to wait for the actual game launch.

What’s more interesting is that you can also find FAUGGame Beta Version Download which is nothing but fake APK launched by scammers to lure innocent people who are excited for the game release.

We would suggest not to get fooled by these Fake Beta Version APK’s of FAUG as it can lead to data privacy issues and your phone will be at the risk of harmful viruses and even be prone to hacking.

With all the issues and problems apart, the game has garnered quite a bit of attention and fans are eagerly waiting for the game to launch.

NCore Games took to Twitter to announce the official release of the game, which is said to be launched on November 2020.

Hi, I am Imran founder of everythingforall.in, My Passion Is Everyday Learning And Teaching To People In The Tech Field... By The Way I Am a Tech Youtuber And Blogger.